Since the days after the Great Fire of 1901, when Clara White and her daughter, Eartha, began feeding homeless African Americans from their kitchen on Orange Street, the folks at Clara White Mission (CWM) have been in the trenches – uninterrupted – feeding the hungry daily for 113 years.

The former soup kitchen currently provides three hot meals per day, seven days a week, as well as transitional housing to homeless participants with the intention of moving them to permanent, independent quarters within 24 months. Through its one-stop community development center, it offers job training, employment placement and housing initiatives, as well as a 20-week culinary and janitorial curriculum designed to allow students to practice their skills in an environment that will prepare them for a career in these industries.

Assisting in that training is Clara’s at the Cathedral, located at St. John’s Episcopal Cathedral downtown, which allows students to practice their skills while raising funds for the Mission’s program. CWM also operates a wedding and conference center to raise funds through inhouse student catering, and operates a large sustainable garden, White Harvest Farms, that offers fresh, healthy produce as well as job training to its clients, while raising funds by selling excess produce to local restaurants.

“From 2010 to 2016, we have provided an average of 135,000 meals annually, and the current daily average of persons served by Clara White is 375,” said Clara White Mission President and CEO Ju’Coby Pittman, adding that 86 percent of the individuals eating meals at the Mission are homeless, while the remaining 14 percent fall within the U.S. Housing and Urban Development 2016 income guidelines as “extremely low income” – earning 30 to 50 percent of the area’s median income.

“Congregate meals are served by four other nonprofit providers in the downtown area. Together, our efforts work together to ensure homeless veterans, low-income individuals and/or families are provided a nutritious meal, while our collaborative resources are accessible,” Pittman said.

Clara White Mission, a private, nonprofit organization, got its start as a soup kitchen for Jacksonville African American residents who were unable to get public assistance after the 1901 fire destroyed much of Jacksonville, rendering them homeless. Clara White and her daughter began their “mission work” from their home, believing it was their civic duty to develop an agency that would ultimately reach across racial boundaries to feed the marginalized of the entire city, said Pittman. 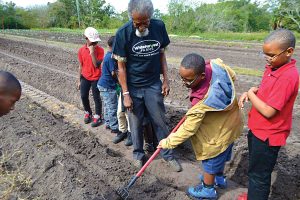 By 1924, Clara White Mission had become one of 19 charter members of Community Chest, the predecessor of United Way. The Mission, which was incorporated in 1936, received tax-exempt status from the IRS in 1945. Its daily feeding program remains the nucleus of its agency services, which also include housing, job training in culinary arts, janitorial/construction skills, job placement and job creation.

Today the Mission has been rebranded from a soup kitchen to a Community Development Center, providing its clients with an opportunity to “transform, transition, and prepare” for long-term sustainability in their lives, said Pittman. “Our services have allowed our targeted population to receive the skills and tools necessary to live a quality of life, which they deserve,” she said.

“Fiscal uncertainty, government budget tightening, the rising cost of food and the increased demand for services have impacted nonprofits such as the Clara White Mission over the last five years,” said Pittman, noting monetary donations are the best way for the community to assist in CWM’s efforts.

“To implement vision and plans, it’s necessary for our agency to become more innovative and diversified, to address the issues that affect the poor,” she said. “Investments into human capital from the duPont Fund allow the Mission to increase its organization capacity and build a continuum of sustainable programs that lead to financial autonomy.”

The food it distributes comes from food banks and Feeding Northeast Florida, as well as special purchases provided through donations, and White Harvest Farm, located at 4850 Moncrief Road, a neighborhood decreed by the United States Department of Agriculture as a food desert. Clara White Mission established the farm in 2013 on 11.5 acres of land it owned and three adjacent parcels it purchased in 2014. In the future, it plans to expand White Harvest Farm and Market, Pittman said.

“White Harvest Farm is positioned to have a positive impact on quality of life through visible and physical improvements for long-term health, social and economic empowerment,” she said. “This urban farm initiative helps benefit and improve access to healthy foods, where food desert residents have little options of fresh produce.

“In addition to offering fresh produce, we will offer vocational training in agriculture, including national certifications, and the opportunity to improve life skills for employment and higher wage job options. We envision this initiative revolutionizing the community to a full scale and to have an immediate impact for targeted food desert residents in other communities as well as a model for duplication,” Pittman said.

By her own admission, Delores Barr Weaver doesn’t relax very often or have time to read anything frivolous. As primary decision-maker when it comes to…