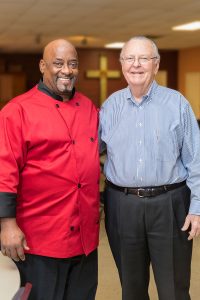 The Christian nature behind the City Rescue Mission (CRM) purpose is what attracted Albert J. (Bud) Toole and his wife, Carolyn, to begin serving with the Mission 28 years ago.

“The reason I left the corporate world was because I wanted to do more with my life than just make a bunch of money,” said Toole, who accrued enough to retire comfortably by age 50. “The Lord has blessed me with well-paying jobs. I could have quit at age 45 or 50, joined the country club and played golf every day, but I didn’t want to do that with my life.”

He and his wife are one of six founding couples that started Christian Family Chapel on St. Augustine Road, a church which now boasts three services and 1,500 congregants. He also co-founded East-West Ministries International to train and mentor faithful and reliable pastors, and spent many years personally traveling behind the Iron Curtain providing underground Biblical education to students, and secretly distributing Bibles.

The Tooles, who have been married 58 years, learned about City Rescue Mission in 1989 from a friend in Jacksonville’s Downtown Rotary Club. The couple started by serving Thanksgiving dinner with their church group, and since then Bud has served as a mentor to former drug addicts seeking help through City Rescue Mission’s year-long LifeBuilders program.

Toole has also spent more than 20 years on City Rescue Mission’s Board of Directors, many years as chairman. He was responsible for bringing “policy governance,” to CRM, which is a special way of managing the nonprofit through the board. “I’m an accounting type of person so I was on the finance committee all these years and as Board Chair I brought this to them because I learned it from working with East-West Ministries,” he said. “It helps us track what was going on.”

Meanwhile, for more than 10 years, Carolyn has consistently worked on Thursdays helping check in clients in CRM’s medical clinic, where Jacksonville doctors and nurses volunteer.

“When I go there, I have direct contact with the people in the program. I get to be with a lot of people who are going through a lot,” said Carolyn. “I meet people who have led horrible lives, addicted to drugs and such, who are trying to put themselves back together. I admire their courage, and I’ve seen a lot of strong faith in these people.

“I’ve learned from them, and it’s strengthened my faith in God,” she continued. “I don’t think you can beat drugs without God.”

Bud agreed. “What City Rescue Mission does is take some pretty rough people and spend a year with them. Those who work at City Rescue Mission pour their lives into helping them, and they take a very Biblical view of what Jesus says in the Scriptures of how we are supposed to spend our lives. The program is based on the words and teachings of Jesus, and after a year, when they come out, they are changed people,” he said.

“I want to do something with my life that in God’s eyes is something that should be done, and that is to help the poor. I’m not a doctor. I’m not an engineer. I’m just a guy, so I do whatever I can do,” Toole said.

A grant of $400,000 awarded to the Greenwood School by J. Wayne and Delores Barr Weaver through the Weaver Family Foundation Fund will help the…