“What community outreach and fan engagement does is build spirit,” said Peter Racine, President of the Jacksonville Jaguars Foundation. “It’s that simple.”

This parallel can be seen throughout the city of Jacksonville and Northeast Florida as sports continue to grow in their influence. With the arrival of the Jacksonville Jaguars in 1995, the community came to understand that, beyond the fun and games, major sports franchises change the game of giving.

Football fan or not, there’s no denying the impact the Jacksonville Jaguars make on our community. Economically, they fill hotel rooms and restaurants, empty rental car lots and store shelves. But, less tangible are the changes that take place due to charitable programs and participation that goes straight to the heart of the community. The Jaguars won’t experience a winning season every year, but because of the gold and teal’s commitment, Jacksonville does.

Abiding by the philosophy that there is no “I” in “Team,” many times the Jaguars Foundation’s effort to improve the community are indirect to the point of being off many peoples’ radar all together. But to the thousands of Jacksonville men, women and children, including active-duty military and veterans who are positively impacted each year, the Foundation has been a true game-changer.

“We align with NFL priorities and the team’s priorities of children and families, military and women’s health issues. It ties a good knot,” said Racine. “The Weavers took giving to a whole new level. What the Khans are doing is saying, ‘Our goal is to not just make the Jaguars better, but to make Jacksonville better.’ The business community is really on fire about this. What we’re finding is that corporations beyond those affiliated with the team are saying ‘What can we do in the community to partner up?’”

In theory, big salaries make big differences. Higher profile athletes command more attention, both on and off the field. And off the field is where charity in a city can go a long way.

“It’s using the cachet that sports celebrities have,” Racine said. “That’s very different from institutional philanthropy in that a guy like Tony Boselli not only started his own program, but is actually running it. That’s a bigger step, because not only are you raising money for a cause, but now you are responsible for those kids and their growing up process.”

While most players are passionate about charities of their own, both in and out of town, collectively as an organization, the Jaguars Foundation makes active strides at improving the lives of everyone in the community.

“There is a synergy that says ‘Yes, there is a business part to the Jaguars, and then there is the community side’,” said Racine. “That is where the sweet spot is. That allows us, in a market like Jacksonville, to do some pretty significant good.”

From the $300,000 in charitable tickets, 500 Jaguar and ROAR cheerleader appearances and more than 1,000 donated items to nonprofits, “significant good” is a mild way of putting it.

One of two projects presently high on the priority list for the Foundation is the creation of 10 community football fields within the next three years.

Make no bones about it, the leadership within the Jaguars front office exhibit the spirit of giving and community involvement. In September 2015, Jaguars General Manager David Caldwell, along with his wife Joelle, chaired the Jacksonville Humane Society’s top fundraising event, Toast to the Animals 2015, for the second year in a row. Partnering with the Jaguars GM and his wife has certainly helped to raise the bar. The Terrace Suites now play host to the annual event and the contribution to the Jacksonville Humane Society’s Medical Fund has made significant strides. With hearts for homeless animals, the Caldwells walk the walk and have taken on three rescue dogs as well.

“I’ve always done something for animals, it’s just my life, what I do,” said Joelle. “One of the first things we wanted to do when we got to Jacksonville was get involved with the Humane Society. What they do there is phenomenal.”

That same month, Jaguars President Mark Lamping was awarded the 2015 Florence N. Davis Award for Community Achievement. Community Connections selected Lamping and the Foundation for contributions to the Jacksonville nonprofit community and assistance with local families in need. The Jaguars, however, are but one of the driving forces behind helping those in need.

From Tee to green 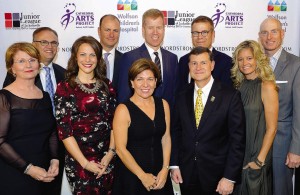 If you’ve spent any time in North Florida, you’re certainly aware of the PGA TOUR’s commitment to charity. It’s also no secret what the PGA TOUR, via THE PLAYERS Championship, gives back to the local community. In addition to the colossal economic impact THE PLAYERS makes on our home turf, last year alone, the tournament gave $7.5 million to worthwhile organizations.

“Since the tournament came to the area in 1977, we’ve provided just under $68 million to the Jacksonville community,” said Matt Rapp, PLAYERS Championship Executive Director. “We’re the lead and largest sponsor, financially, of the Quality Education for All Fund, which targets the 37 schools in the Raines, Ribault and Jackson feeder pattern, which are the most challenged areas of the region. We are also the largest funder of scholarships at University of North Florida and Florida State College at Jacksonville. We support Edward Waters College and Jacksonville University as well.”

THE PLAYERS has a long-term grant with Wolfson Children’s Hospital, where they’ve created THE PLAYERS Center and outreach program to get underprivileged youth properly prepared for their educational future.

Much like professional football players who support charities of their own, professional golfers tend to leave their mark in the communities they call home.

Locally, the Jim & Tabitha Furyk Foundation is as good of an example as it gets. For 20 years now, the greater Jacksonville area has been their adopted home and beneficiary of their foundation’s efforts.

“We have so many wonderful children’s charities in Jacksonville and when we started raising children here, you start to feel like you’re part of the community, like it’s home,” said Furyk, a 17-time PGA TOUR winner. “Jacksonville is our home. We want to make a difference in this area.”

“With our children in school here, we really wanted to do something to help out,” said Tabitha. “We’re here to stay and to do all that we can…possibly even other things, like scholarships.”

Among the organizations which benefit from the Jim & Tabitha Furyk Foundation are Wolfson Children’s Hospital, Operation Shower (for military families) Blessings in a Backpack (low-income families) and Community PedsCare (pediatric hospice and palliative care).

MaliVai Washington assists student with homework in the Tennis & Tutoring (TnT)
program. Students in the program

Not far from the Furyks’ home and PGA TOUR National Headquarters in Ponte Vedra Beach is the home base of ATP (Association of Tennis Professionals) World Tour. Its players span every corner of the globe and, as such, their charitable reach embraces the world over. Its “ACES For Charity” program is committed to giving back to the communities in which Tour events are held. Thanks to one of tennis’ most celebrated players, that deft touch with community is not lost on the North Florida community.

For two decades legendary tennis professional MaliVai Washington has taken advantage of his elevated stature for the betterment of this community. In doing so, he has utilized the game of tennis as the caveat to new worlds and programs to help at-risk youth avoid social pitfalls and instead reach their potential.

“The work we do in Northeast Florida is critically important,” Washington said. “I know that we are changing the lives of the young people we serve, but at times we are actually saving lives. We have been in Jacksonville for 20 years now and have seen young people from challenged neighborhoods grow up to be successful adults in this community. That is more gratifying than anything else.”

Philosophy on the Pitch

Jacksonville Armada FC owner Mark Frisch has kept the Jacksonville community at the center of his heart all his life. Born and raised in the community, an unwavering priority is to give back to Jacksonville – the city that has provided so much to his family. In honor of National Breast Cancer Awareness Month, the team wore signature pink jerseys for two October games, with a portion of the proceeds going to the American Cancer Society. In a show of support to the military in August, the North American Soccer League team featured Military Appreciation Night at one of its games.

“Soccer is a game that is fueled by a sense of community,” said Jacksonville Armada President Steve Livingstone. “Our club is committed to being highly visible in the Jacksonville community and having a strong charitable presence.”

The Jacksonville Giants, who claimed the 2012 and 2013 American Basketball Association (ABA) titles, have also taken their game to the community through their “Books for Baskets” program. In an effort to help local students achieve academic success through reading, team members, team dancers and the team mascot (“Mr. Biggs”) visit each participating school to engage with students in stimulating and interactive dialogue about required reading. Because of its overwhelming success, the “Books for Baskets” program was awarded the 2011 Duval County Schools Business Recognition Award.

With a real push on reading importance of its own, the Jacksonville Suns began the “Catch Reading Fever” campaign. During the school year, longtime Suns President Peter Bragan, Jr. visits upwards of 20 schools for the “Casey Challenge.” After reading to students the legendary baseball poem “Casey at the Bat,” Bragan challenges students to memorize the poem. As a motivating factor, students who successfully achieve the feat receive a bat or glove from the team. As an additional way to spark a reading interest, Bragan also reads his favorite children’s books to area students.

Started in 2010, the Jacksonville Sharks have taken the Arena Football League (AFL) by storm. In its inaugural season, the team ranked third in the league in ticket sales and average game attendance. The following year, the Sharks beat the Arizona Rattlers to claim the AFL Championship title.

Committed to the community they call home, the Sharks give back in a number of areas. From working with the Sulzbacher Center to serving meals at the Mission House in Jacksonville Beach to various military appreciation initiatives, the team is as devoted to its off-the-field performance as they are the throes of completion on the field.

Sports organizations and athletes do make a tremendous impact on the growth and stability of Jacksonville. On a more grandiose stage, perhaps, but their impact is reflective of everyone in the community who extends a helping hand and call Jacksonville home. From snow-cone proceeds at T-ball games to state-of-the-art hospital wings, Jacksonville is a remarkable place called home, driven by its impact across all playing fields.

Mary Pat Corrigan has joined Sulzbacher in the newly created role of chief health officer. Corrigan is a well-known and respected community leader and most…