Founded in 1926, Hope Haven, which celebrated its 90th birthday in April 2016, has evolved over the years from a full-service children’s hospital to an interdisciplinary diagnostic and treatment center, providing services for children with physical, intellectual, and developmental disabilities.

Although officially celebrating 90 years, Hope Haven really got its start in the late 1800s when the Hope Haven Association was formed through the efforts of the Duval County Tuberculosis Association, which viewed its initial mission to preserve health among children.

Designed as a “preventorium” for nutritionally and medically deprived children, the original Hope Haven Children’s Hospital was built along the Trout River in 1926.

Thanks to the efforts of William Hardin Goodman, president of Hope Haven and a Jacksonville banker who helped manage the Hope Haven trust fund, the hospital was able to acquire land on Atlantic Boulevard in 1939 and move its operation to the new location, said Dr. Richard Skinner of Riverside, who led the hospital in the 1970s. According to a newspaper article in 1962, Hope Haven was the only general children’s hospital between Atlanta and Miami.

“Goodman was in an accident and was pretty badly injured that he used a cane for the rest of his life,” Skinner explained. “He said if the Lord would allow him to recover from that accident that he would do something for children and he made good on his promise.”

In the new facility, Hope Haven Children’s Hospital focused on caring for children with poliomyelitis, osteomyelitis and other orthopedic and crippling disorders. The original building contained two wings – one on the left was known as the Boys’ Ward, which was sponsored by the Meninak Club, and the one on the right, called the Girls’ Ward, which was sponsored by the Junior League, said Skinner, noting the middle section included offices, physical therapy rooms and a pool for water therapy.

In the 1950s, the hospital’s focus shifted from one on specific diseases to general hospital care for children, including surgery, psychiatry, radiology, pharmacy, laboratory and cast services. During this time, Hope Haven Children’s Hospital began to offer therapies, research, education and other child-related programs.

“Hospitalization in those days was far less expensive than it is today,” Skinner said, adding that when he began his practice in Jacksonville in 1951 the per diem rate at Hope Haven was $7.

In order to raise money for the hospital, Goodman used the “Foote System,” which consisted of a bunch of little books with 15 to 20 pages and with room for 10 signatures on a page, Skinner recalled. Goodman had the books sent to people on mailing lists with letters explaining about Hope Haven and requesting the recipients place money in the book and sign their name at the bottom of the page, he said. 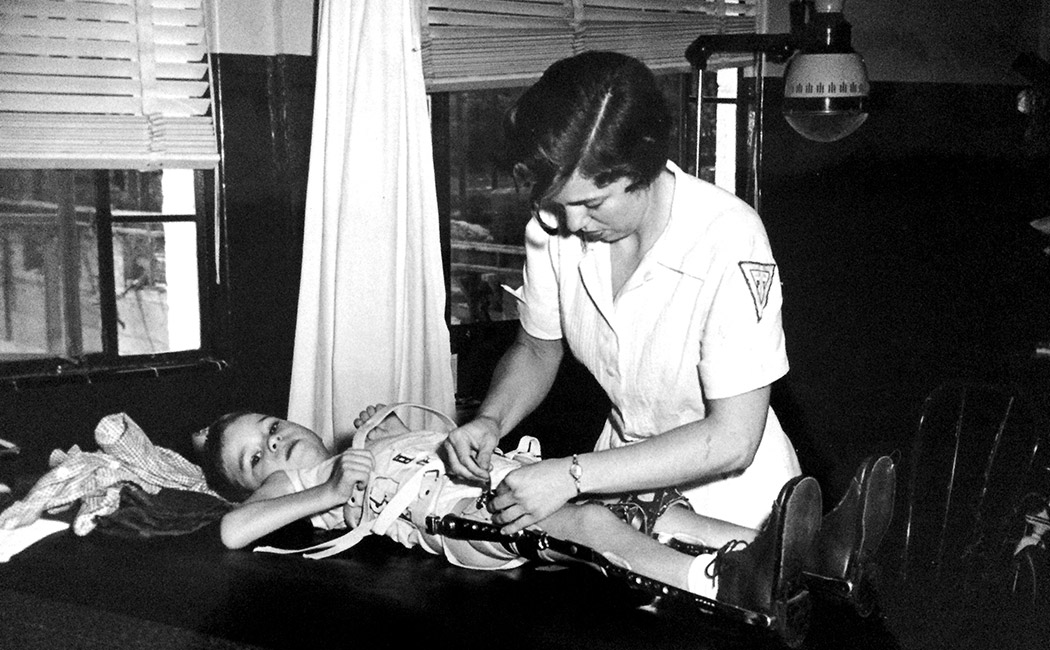 “The idea was when somebody got that and saw a friend’s name in the book he might give money,” Skinner said. “He (Goodman) had 15 or 20 women and all they did all day was open these books, take the money out and re-mail them to someone else. Over time that system fell by the wayside and he couldn’t depend on it.”

In 1970, under Skinner’s leadership, Hope Haven’s goals were expanded to provide diagnostic and treatment services to children with developmental, psychological, behavioral and lear-ning disabilities as well as academic problems.

Nemours Foundation purchased Hope Haven Children’s Hospital inpatient services 10 years later in 1980. The purchase required Hope Haven to rethink its mission. The nonprofit consolidated the interdisciplinary diagnostic and treatment needs and solidified its philosophy to provide these services regardless of a family’s ability to pay. It also designed an innovative tutorial program to help children of all learning levels through computerized instruction and began a summer academic computer camp.

In 1989, Hope Haven moved to its existing location at 4600 Beach Boulevard. Three years later it changed its name to Hope Haven Children’s Clinic and Family Center in order to incorporate new services into its mission. In the years that followed the clinic, which prides itself in treating its clients like family, has expanded its services to include evaluations for autism, ADD/ADHD and Down syndrome as well as individualized tutoring, special needs therapies, after-school programs and even job placement services for young adults with special needs.

At its 90th anniversary celebration, the outpatient facility in St. Nicholas unveiled a new butterfly logo and motto – “Where hope transforms families.”

“The butterfly is the symbol of the ‘transformative journey’ families find when they utilize any one of its services,” said Jenny Kobin, chairman of the Hope Haven Board of Directors. “The tag line emphasizes the focus we have on the positive,” she said noting the clinic emphasizes what individuals with disabilities can do, not the opposite.

“You may know us as Hope Haven Children’s Clinic, and before that as Hope Haven Hospital. Like any organization we’ve transformed. Today we’re Hope Haven. We remain focused on ensuring that children realize their full potential,” said Joanne Robertson, Hope Haven CEO. “To do that, we have an incredible team of professionals who treat clients like family and provide specialized services and educational opportunities.”

Joy, purpose, and an appreciation for the gifts God gives are the reasons that Lisa Obringer has served for many years as coordinator of the…