Since its inception five years ago, Hunger Fight has distributed more than 3,711,943 prepackaged meals to children and families deemed food insecure throughout the Southeast.

Although the nonprofit, founded by Sherri and Dean Porter of San Marco, is one of the three largest distributors of food to the hungry in Northeast Florida, Hunger Fight follows a far different model from other food banks in the area.

In 2012, after performing volunteer work feeding hungry families, Sherri Porter was shocked to see the high number of children in Florida who live daily with hunger. Hoping to find a remedy, the Porters decided to develop an alternative to food recycling that would not be dependent on food donations or impacted by rapid spoilage.

“My wife loves to volunteer. During our first year of dating, she volunteered me each weekend over 30 weeks for something. She knew God had a calling for us,” Dean Porter said. “In November 2012, we started raising money, then in June 2013 we started packing meals. For what we do, we are the biggest player in the area, but we are not the biggest player in Jacksonville for food distribution; that is Feeding Northeast Florida,” he said. “Their niche is with perishables. We stick with our niche, which is to provide three standalone meals that have 20 essential vitamins and are high in protein.”

Hunger Fight’s three basic meals – Cheezy Mac, Beans ‘n Rice, and Brown Sugar and Cinnamon Oatmeal Breakfast – are shelf-stable, easily-prepared mails that can be cooked simply with boiling water. They can be eaten as entrées or supplemented with other proteins such as meat, chicken, and fish. Each meal is enriched with 20 essential vitamins and minerals, and costs only 25 cents per serving. New to the nonprofit this year is a vitamin-enriched scalloped potato dinner. 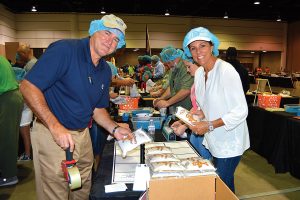 Mark and Lisa O’Steen of O’Steen Volvo lead a group of volunteers at a Hunger Fight packing event at the Prime Osborn Convention Center.

The meals, which originate from basic ingredients, are put together and packaged by volunteers from different civic organizations, schools, or local businesses who sponsor tables at large packing events. Each sponsoring group can direct where the meals will be distributed, whether it be to a local pantry, food-related agency, homeless shelter, specific low-income families and seniors, or to elementary schools with Title 1 students that are registered to take part in Hunger Fights newest initiative – “Feed the Backpacks,” which started in February 2017.

Duval County currently has 42,500 Title 1 elementary school students who qualify for a free or reduced lunch at school because their family’s income is below the poverty line, said Porter.

“They are going hungry over the weekend with little or no food at all and are coming back to school on Monday, not only with a starving belly but also with zero cognitive ability because their attention span is zilch,” he said. “This causes disciplinary issues through the roof because the kids are hungry and uncomfortable. This is the reason we launched our Feed the Backpack program – to put a bigger limelight on those students and provide meals for them over the weekend,” Porter said.

“Our goal is to enhance the existing backpack programs (sponsored by other nonprofits) by picking up where their backpack programs leave off,” he continued. “Adding our meals to their programs reduces the cost of their backpack and allows them to provide more backpacks to the school,” he said. “Where they stop, we want to pick up with the other students and send them home with a four-serving family meal so that the child or their siblings will have at least one nutritious meal over the weekend,” he said, adding there are four backpack programs in Duval County that only cover 21 of the 26 Title 1 elementary schools.

“There are over 100 elementary schools that have absolutely no backpack program or Title 1 assistance for their students at all. Our goal is to go in and hopefully cover all those, but it is a very tall order. We’ve done 3.6 million meals in the past four years, but to cover all the Duval County Title 1 schools we would need to do six million meals a year just for them,” Porter said.

Hunger Fight will still serve a network of 55 food pantries and other agencies in 14 Florida and two Georgia counties, but will be shifting more of its focus to the backpack program in elementary schools, he said. In addition to 24 public elementary schools in Duval County (10,300 students), it also covers all the Title 1 students in Bradford and Putnam Counties, as well as one elementary school in St. Johns County. Hunger Fight backpack programs are just starting in Clay and Nassau counties, and the nonprofit also started a program in Volusia County in October 2017, he said.

In its first year, Hunger Fight furnished 320,000 meals and the number has grown significantly since then. Last year 1,340,000 meals were distributed, and Porter projects two million will be packed and given to the hungry in 2017.

Hunger Fight welcomes cash gifts and does not accept food donations of any kind. Instead it purchases the ingredients for its meals in bulk from the following large food companies: cheese from Kraft-Heinz foods; vitamins from Karlsburger Foods; rice from Riceland Foods; soy and beans from Archer Daniels Midland, and pasta from A. Zerega’s Sons, Inc.

Over the past 12 months, Hunger Fight has increased its staff, warehouse capacity, office space, equipment, and resources. Current fundraising targets include a box truck for meal deliveries and powered pallet jacks to increase the speed of handling materials both in-house and at remotely staged meal-packing events.

“For us it starts with dollar donations, and that give the opportunity for volunteer hours. We have somewhere between 150 and 200 community partners, and each community partner contributes financially, which is an investment in the community,” Porter said. “At our big event in November (2017), we hope to pack more than 800,000 meals.”

Hunger Fight also hosts several large fundraisers a year in Jacksonville – the Color Me Fed ‘Race Against Hunger’ 5K Run/Walk; a Thanksgiving Outreach packing event at the Prime Osborn in November; and the Walk to End Hunger in March and a summer golf tournament. The nonprofit’s operating budget is $800,000, and 79 percent of all money raised goes to buy food, he said, noting “every dollar given to Hunger Fight equals four meals.”

“When my wife started this, our thought was ‘if we could keep a child fed and off the streets, off drugs, and clothed, that would be a good thing to do,’” Porter said.