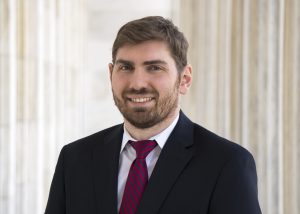 Adam Levine, Ph.D., was selected to be the Cummer Museum’s new director and chief executive officer.

The Cummer Museum of Art & Gardens announced Oct. 17, 2018 the appointment of Adam M. Levine, Ph.D. as the institution’s first George W. and Kathleen I. Gibbs Director and Chief Executive Officer.

Levine, who is currently the deputy director and curator of ancient art for the Toledo Museum of Art (TMA), will begin his new role in January 2019. In the interim, he will consult with the museum’s current leadership and serve as director designate as he relocates to Jacksonville.

“The board’s vision was to find a leader to advance the Cummer Museum’s mission of engaging and inspiring through the arts, gardens and education,” said  Morales. “Adam is a leader in the arts who has unique abilities to enhance our collections and exhibitions, broaden already strong community engagement and ensure that Mrs. Cummer’s vision of a ‘museum for all of the people of Jacksonville’ is realized.”

Dr. Levine, who has more than 10 years of management and curating experience in leading arts institutions and museums in America, joined the Toledo Museum of Art as an Andrew W. Mellon Fellow before being appointed assistant director. He was promoted to associate director and then deputy director, all the while acting as the curator of the Museum’s important collection of ancient art. From 2011 to 2013, he was a collections management assistant in the Greek and Roman Art Department at the Metropolitan Museum of Art in New York City. In 2009, he cofounded Art Research Technologies in New York City and served as CEO until 2012; the company was sold to a London-based finance firm in 2016. He also has consulted extensively for national and international museums, universities, and think tanks. TMA, founded in 1901, has more than 20,000 artworks in its collection, an annual budget of nearly $16 million and received over 400,000 visitors last year.

Holly Keris, who has served as acting director during the search process, will return to her position as chief curator and chief operating officer (COO) of the Cummer Museum when Levine joins full-time. “Holly has been a valuable and instrumental leader during this time of transition for the organization and the board is forever thankful for her ongoing commitment to the Cummer Museum,” said Morales.

The George W. and Kathleen I. Gibbs director’s position is endowed through a gift made in 2017 of $4 million from The Disosway Foundation of New York. The foundation was established by Dudley D. Johnson, a current Cummer Museum trustee whose grandfather, George W. Gibbs, influenced the development of Jacksonville during the first half of the 20th century. Gibbs was an inventor and pioneer shipbuilder who founded the Gibbs Gas Engine Company which became the Gibbs Corporation. Gibbs is noted for championing the building of the Main Street Bridge connecting downtown to the Southbank of Jacksonville. The director position is named in honor of George and his wife Kathleen Maria Ingraham Gibbs, who is credited with being his bulwark and confidant throughout their 57-year marriage. Proceeds from the endowment fund the director position in perpetuity and additional funds the endowment raises in its future growth are earmarked for Cummer Museum operations and programs.

By her own admission, Delores Barr Weaver doesn’t relax very often or have time to read anything frivolous. As primary decision-maker when it comes to…