Thanks to its warmth and concern, the Cascone family has never forgotten the great start Morning Star School gave Sharon, one of the school’s first students when it was founded in 1956 to serve children with learning disabilities.

“The Cascone family approached us about helping to fund our new Life Skills Center – that in itself is a gift from God,” said Morning Star School Principal Jean Barnes.

The fourth child of Michael and Dorothy Cascone of Jacksonville, Sharon Cascone Ray was born with a hearing disability which led to speech impairment. Sharon and her family attribute much of her success in life to her foundational learning experience at Morning Star School, and for this reason, The Michael, Jr. and Elizabeth Belyea Cascone Family Foundation has made a naming donation in her honor to the school’s new Life Skills Classroom.

On December 18, 2017, Sharon, her son, Charles Ray, and her brother, Michael Cascone, Jr., visited Morning Star School. They were there to take a tour of the school (specifically the new high school wing and the Life Skills classroom) hosted by Principal Jean Barnes, Sister Elise Kennedy (former principal of St. Pius and now on staff at Morning Star), and Deacon Scott Conway (Superintendent of Catholic Schools, Diocese of St. Augustine).

Also on hand to greet Sharon Cascone Ray for the first time in 60 years was Sister Elizabeth Marie Stoup, SSJ (principal of Morning Star School when Sharon was attending in the late 1950s).

For the Cascone family, the dramatic reunion of former student and teacher took precedence even over the tour of the school’s beautiful new high school wing and planned Life Skills classroom. 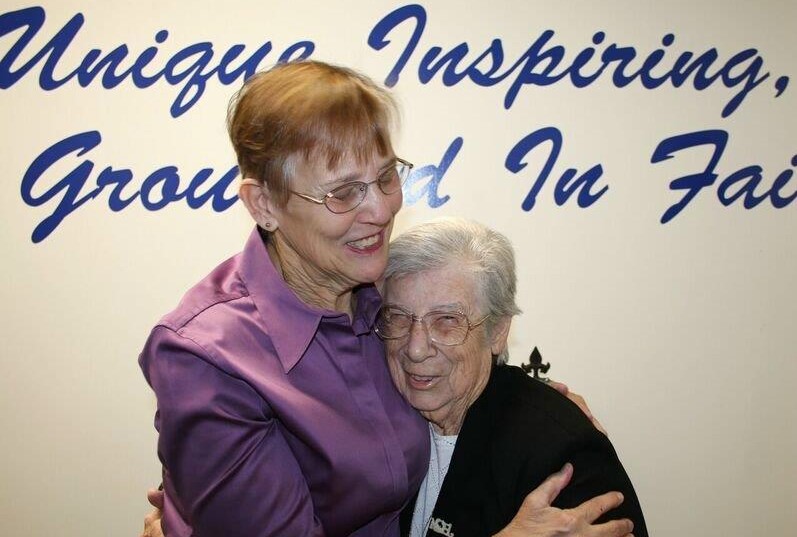 “This is my teacher!” declared Sharon, enthusiastically introducing Sister Elizabeth Marie to her brother and son. “We haven’t seen each other for 60 years!”

Embracing her former student, it was obvious that Sister Elizabeth Marie remembered Sharon fondly. “Sharon was a stand-out student to begin with,” she said.   “There were only a few students at the beginning and all of us on the staff were responsible for the whole shooting match, so I got to know Sharon well. First, she was one of the most helpful students I ever taught. There were different levels of learning and different ages of children in the classroom and Sharon wanted to assist me in teaching them all.”

Sister Elizabeth Marie grinned, recalling that “Sit down, Sharon!” was a phrase she used frequently.

“Sharon was smart and knew exactly what she wanted,” continued her former teacher, “but sometimes it was hard for her to express her needs and she would get impatient. That’s where I came in. I’ve been told I’m a very patient person…and it helped that I could understand what she was saying.”

The positive support she received at Morning Star School from second grade on helped Sharon to grow and flourish, preparing her for the challenges she would face as a sixth grader in public school.

“I was so proud of her when she went into the public school,” recalled Sister Elizabeth Marie. “It was before the law was passed giving special needs children the right to education and she went into a situation that took real courage.”

Sister Elizabeth Marie shared an old black and white photo of Sharon’s class at Morning Star “back in the day,” and the two laughed as they pointed out the young girl in a plaid dress standing directly in the middle of the photo. “That’s Sharon,” said Sister. “Right in the middle of everything!”

Sharon’s assertiveness and positive attitude, reinforced by Morning Star School, were also the result of being born into a nurturing family. Sister Elizabeth Marie remembered the Cascone family well. “It was a very caring, close-knit family and Sharon was no more special to them than any of her siblings. They treated all of their children alike and obviously had great love and high expectations for each of them. I’ve heard they all achieved success, too.”

Friendly, fearless, and outgoing, with high self-esteem instilled in her at home and at school, Sharon was an all-around athlete and a good student. She made many friends among her classmates at public school, but not all of them were understanding about her deafness. At a Paxon High School reunion in 2010, she marched up to a fellow alumni and declared, “I know you! You were a bully!” Embarrassed, the man apologized profusely and gave her a big hug.

After graduating from Paxon High School in 1970, Sharon worked for the Civil Service in the Handicapped Program, teaching life skills to persons with disabilities.

As the nation enters the “giving” season, seniors at the Florida Christian Center, 1115 Edgewood Avenue S., are hoping residents will help them reach a…