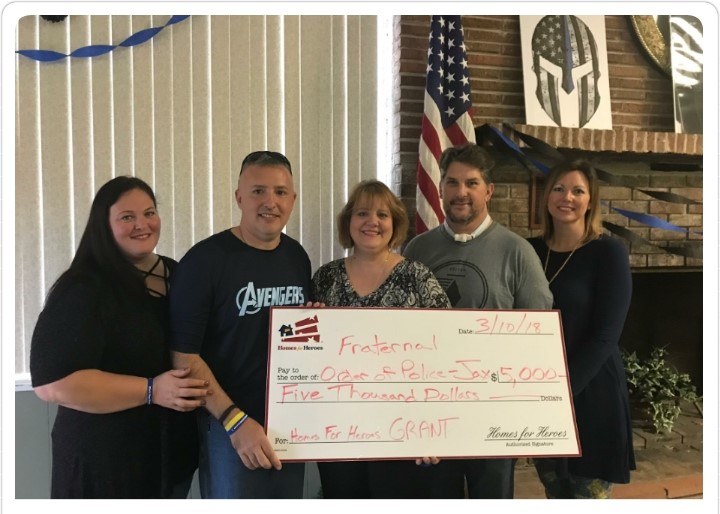 The Fraternal Order of Police recently received a $5,000 grant, through the efforts of the Florida Homes Realty real estate Saunier team, to help two Jacksonville Sheriff’s officers wounded in the line of duty.

Homes For Heroes is the largest nationwide network of affiliate real estate specialists and local business affiliates committed to providing easy ways for heroes of our nation to save on a home. Heroes include, police, firefighters, EMS, military (active, reserve, veteran), health care workers, and teachers.

Shortly after 9/11, Homes for Heroes was established to give back to heroes for all they do.
To expand the circle of giving, Homes for Heroes, Inc. donates a portion of its earnings to the Homes for Heroes Foundation. Every time a hero buys or sells a home they are helping heroes in need.

“We still have a few tickets to give away to Heroes,” said Janet Saunier. ‘We want to support our Heroes, who help every day, but particularly in the wake of Hurricane Irma, which impacted Jacksonville.

“We want to thank all first responders who really went above and beyond,” said Saunier. “Hockey with a Hero was created to give all of us a voice to share our Hero Story, to give thanks to those heroes in our community who continue to give so selflessly,” she added.

You can nominate a hero at www.hockeywithahero.com.