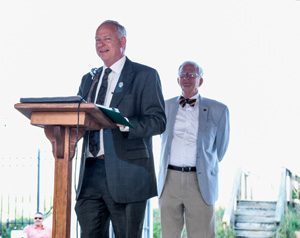 “We are so happy to honor our wonderful friend, Councilman Bill Gulliford, as this year’s Beaches Healthy Hero. Not only has he advocated for healthcare to become a dedicated part of the annual City budget but he took a strong leadership position on our City’s tragic opioid crisis and created a model program that is saving lives daily at the beach and throughout the city,” said Cindy Funkhouser, President and CEO of Sulzbacher.

Gulliford was elected to the Jacksonville City Council in 2011 to represent District 13, which includes the beaches and the southeastern section of Duval County.  In 2012, he was awarded the Charles D. Webb Award, for extraordinary commitment to public service, by out-going president Stephen Joost.  The members of the City Council unanimously elected him to serve as President for the 2013/2014 Council Year.  He received the Mary L. Singleton Award for 2014-2015.