Two Jacksonville pet shelters are participating in a relief effort to move animals out of the hard hit Florida Panhandle and Bainbridge, Georgia after Hurricane Michael swept through in early October.

First Coast No More Homeless Pets (FCNMHP), at the request of Best Friends Animal Society, joined animal relief groups to rush supplies in, and take animals out, of the Hurricane Michael disaster zone. The Jacksonville Humane Society (JHS) evacuated approximately 100 cats and kittens via a Wings of Rescue flight departing Cecil Airport on  Oct. 15. The cats and kittens were flown to Brandywine Valley SPCA in Delaware.

Three FCNMHP trucks and a support van left the Cassat Avenue Regional Hospital in the pre-dawn hours of Oct. 12, filled with critical supplies, hundreds of empty animal creates and eight trained volunteers and staff. The convoy went to Bainbridge, Georgia, a town 20 miles north of the Florida-Georgia line, to the Bainbridge Animal Shelter where 75 dogs, and an equal number of cats, needed to be evacuated. The hospital has no power, running water and is dealing with a number of other storm related issues.

“Our team of volunteer and paid staff are proud to support animal welfare groups impacted by this devastating storm,” said Rick DuCharme, Founder and CEO of FCNMHP. “So many of our partners across the Panhandle and Southern Georgia were there to support our local relief efforts during Hurricanes Irma and Matthew so this is just one more example of our collective commitment to saving lives.”

A load of pet food and supplies were transported to hard-hit Shipley, Florida as well, and further relief efforts are anticipated. 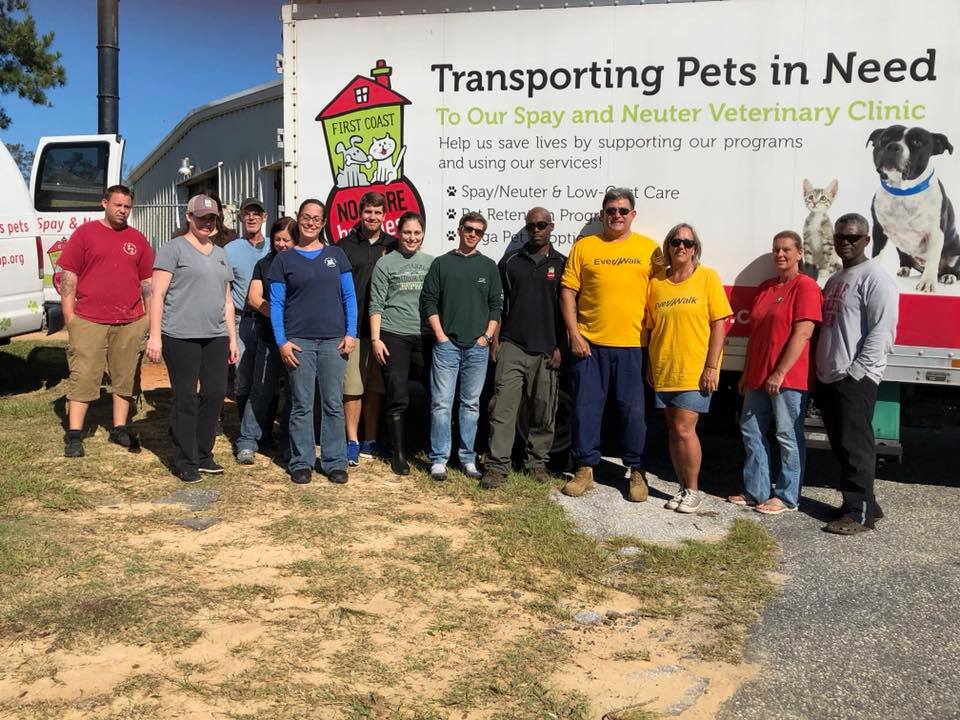 JHS and Brandywine Valley SPCA (BVSPCA), in coordination with national organization Best Friends Animal Society, are leading a multi-agency response to Hurricane Michael. This flight was made possible when the Jacksonville Jaguars’ Malik Jackson reached out to JHS and offered to help through his foundation, Malik’s Gifts (www.maliksgifts.org).

“Malik supports animal welfare in the communities where he lives and works,” said JHS CEO Denise Deisler. “We are so grateful; without his support, this would not be possible.”

About half the passengers on the flight were JHS cats and kittens being evacuated to make room for those incoming from areas impacted by Hurricane Michael. The other half of the space JHS offered to Alachua County Humane Society (ACHS), who was among the first to respond to needs from impacted areas. ACHS received cats evacuated from areas that were in Michael’s path in advance of the storm, as well as cats from Bay County, which lost power during the storm.

Both JHS and BVSPCA are serving as hubs in response to the disaster. Hubs receive animals, provide needed care, and then transport them to receiving shelters for adoption.

“By serving as hubs, we are able to respond to the disaster in a fashion that does not affect our local shelters negatively,” said Deisler. “We believe partnerships and collaboration save lives, and this is the perfect example of that. By leveraging relationships in a cooperative manner, we make greater impact. We are better together.”

JHS and BVSPCA, with the support of Malik’s Gifts and Wings of Rescue, were prepared to make a second flight later in the week based on emerging needs.

“Make Your Mark” was the theme for the 2018 National Philanthropy Day luncheon and awards program held Nov. 6 at the Hyatt Regency Riverfront Hotel…