It was no coincidence that the Child Guidance Center’s office on St. Augustine Road was selected as the 9/11 National Day of Service and Remembrance community project by the Jacksonville office of Holland & Knight.

Lindsay Swiger, a partner at the downtown law firm, also happens to serve on the Child Guidance Center’s board of directors as first vice chair/chair-elect. And the 67-year-old nonprofit was in dire need of repairs and beautification inside and out.

“This type of help is unbelievable,” said Theresa Rulien, Ph.D., the president and CEO for Child Guidance Center. “We don’t have money for a new roof, a new drain field, much less funds to beautify the offices. This is really a godsend.”

Established in 1951 to help children, adolescents and their families cope with the stresses of life, the center offers a full range of comprehensive, state of the art behavioral health services. The programs were created to focus on kids at risk for removal from their homes, or who are victims of sexual abuse, physical abuse, families with domestic violence, alcohol abuse, said Rulien.

With four offices, a 24-hour mobile crisis rapid response team, and therapists who go into the community into schools and homes, there aren’t enough funds to pay for niceties.

“We have funding through wonderful partners like the Kids Hope Alliance, the United Way, through Medicaid, but none of the grants or contracts pay for the correct amount of administration, overhead, etc.” Rulien said. “It used to be someone would give you $100 and say ‘Do good work,’ and now they give it with the stipulation ‘I want it spent for this thing.’

Rulien doesn’t begrudge restricted giving, but said often it comes down to providing a needed service versus maintaining the infrastructure where the service is performed, similar position many low-income families experience when making a choice between paying the utility bill or feeding hungry children.

Rulien was ecstatic to learn that more than 100 volunteers from Holland & Knight and its community partners would descend on the Southside office and headquarters September 8 with paintbrushes, weedwhackers, trimmers and other tools in hand to give more than half a day’s time in various renovation projects including painting, landscaping, facility maintenance and sprucing up the grounds. 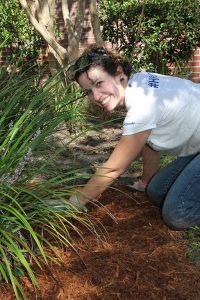 Beth Rothenberg, Holland & Knight attorney, puts fresh mulch on landscaping at the Child Guidance Center on the 9/11 National Day of Service and Remembrance. 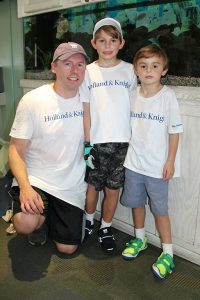 Jason Havens with sons Cooper and Archer helped freshen the lobby of the Child Guidance Center on 9/11 National Day of Service and Remembrance.

“We’re refreshing the lobby, adding a chalkboard wall and a Lego wall, cleaning the furniture, painting and cleaning the interior throughout the center, preparing goody bags for the kids, and for the staff, pressure washing, landscaping, mulching, weeding, trimming, building a therapeutic garden – giving the property a whole facelift inside and out,” said Swiger. “It’s a great family event, we have helpers of all ages.”

“This is an effort that started after 9/11, our eighth year of doing community service projects, in honor of a partner in the New York office who lost his life during the tragedy as an emergency responder,” said Swiger, referring to Glenn Winuk, a Holland & Knight partner and volunteer EMT who, on 9/11, exited the firm’s New York office and died while rescuing others.

By Kate A. Hallock

Impact. It’s felt through the crunch of shoulder pads of 350-pound linemen protecting the Jaguars quarterback. It’s the moment a driver meets the golf ball…