The Jacksonville Humane Society (JHS) celebrated the end of the Campaign for a Compassionate Community and honored Linda Berry Stein, campaign chair and major donor with a special ceremony Jan. 15 at the Beach Boulevard facility.

The campaign raised $14.5 million to build the JHS Adoption, Education and Pet Help Center after a fire had destroyed the former center in 2007.

“We’re almost approaching 12 years since the fire,” said Denise Deisler, chief executive officer. “They actually started a campaign for a new building before the fire that destroyed the shelter, and then immediately after the fire in 2007 the economy tanked, so that was the worst possible time to be raising money for a new building. There were some stops and starts along the way, but we went at it with gusto and we’re not stopping or looking back.”

The Campaign for a Compassionate Community began in 2013 with a goal of raising the funds needed for a new building. Construction for the new center began in 2016 and the building officially opened in November 2017.

At the ceremony, JHS unveiled a prominent sign that features Linda Stein’s name in appreciation for her personal contributions and dedication to the animals in Jacksonville. 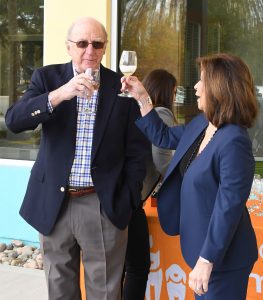 David and Linda Stein toast the completion of the Campaign for a Compassionate Community at the Jacksonville Humane Society.

“We’re celebrating our campaign chair, Linda Stein, and her success. It’s a special day to honor Linda for all of her hard work leading us here, as well as take a deep breath, and say ‘Yes, this is done and so what’s next?’” said Deisler.

“It doesn’t end here. This is the beginning, it opens brand-new doors for us to impact and serve our community,” Deisler continued. “Our education program has taken off and is thriving, our animals are healthier and stay here a shorter amount of time, it’s friendlier so people come in to adopt more, and that translates to being able to care for more animals. We’re fast approaching the 9,000 mark and we were barely at 4,000 [animals sheltered] when we started down this path.”

Deisler said the JHS would be taking on a regional and state role, using their experience to share with other communities who may be endeavoring to do the same. “We’ll share with them how to do a great adoption program, a great intake program, best practices, model programs and we’re just at the beginning of sharing that. We’ll always be committed to our community and now we’re committed to sharing that and helping other communities have great moments like that, too,” she said.

Shortly after their 1977 marriage, New Yorkers Donald and Maria Cox began collecting art at a time considered to be “very alive” for art in…