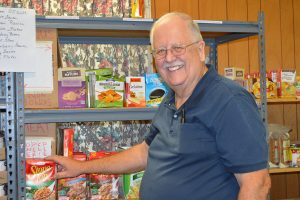 Six years ago, when he retired as a labor relations administrative manager with the Jacksonville Energy Authority’s St. Johns River Power Park, Bill Hiers decided he would spend his free time giving back to his community by volunteering for both a civic and charitable organization.

For civics, he volunteered to become a member of Jacksonville’s City Civil Service Board, a regulatory board with members appointed by the mayor, JEA, or the School Board.

As for the nonprofit, Hier’s choice was close to home. A member of Riverside’s Trinity Lutheran Church, he signed on to volunteer 20 hours a week helping with the food pantry ministry.

“This was available, and many, many years ago I had worked for A&P while I was going through college. I felt I had a little background in the food area, and it seemed to be a good fit,” he said. “I’m here quite a bit.”

On Mondays, Hiers assists his wife, Karen, who heads the ministry’s “bread crew,” which receives a load of bread from Waste Not, Want Not in Orange Park, a volunteer-based group that exists to prevent the discarding of food and other items that can be used to fight hunger and poverty in the Jacksonville area.

“The bread comes in bags and our crew sorts and stacks it,” he said. “I also help set up at the pantry on Monday morning when we get two loads of food from Winn-Dixie in Mandarin and Harveys Supermarket on Edgewood Avenue. We have a couple of volunteers who pick up donated food. We bring it into the pantry, sort through it and store it on the shelves for distribution.”

Similarly, Hiers also works Wednesdays when a truckload from Feeding Northeast Florida comes in. “The truck goes to various stores on the Westside and picks up their donation. Instead of taking it back to the warehouse where they have their people sort through it, they allow us to have it and we do the sorting for them and store it,” he explained.

On Thursday, Hiers and his wife also work with a crew of volunteers by distributing food to clients who come to the pantry. “I get a good feeling helping out,” he said. “There is no other way to put it. It just makes you feel good that you are helping others.

“And it’s not just Trinity members that we work with. It’s a community effort,” he said, noting that members of Riverside Park United Methodist Church, Avondale United Methodist, Riverside Presbyterian, and many others assist with the pantry ministry. “Many other community churches send volunteers and contribute to it. I’ve met a lot of very good friends. We have a lot of fun doing this. We give each other a hard time, but that’s all part of the fun,” he joked.

“One time we had folks from Riverside Presbyterian come over in the summer to help us sort through canned goods from a mail carriers’ collection they had. There were a bunch of kids helping out, and I heard one of the kids as he was leaving – an eight-year-old – saying ‘We helped people today.’ Now come on, how can you beat that? An eight-year-old that did that and knew he was helping somebody. That’s a darn good feeling,” said Hiers. “It’s a wonderful feeling to sit back and reflect that you helped somebody.”