In commemoration of the NFL’s 100th anniversary and the Jaguars’ 25th season, the Jacksonville Jaguars are inviting fans to join Huddle for 100, a league-wide effort to inspire 1 million people to volunteer 100 minutes of their time to make meaningful contributions in each team’s local market.

The Jaguars’ official Club Huddle is One Team. One Home., a partnership with TIAA Bank that was first introduced in 2018 as a joint five-year, $2 million pledge to help build or repair 100 homes in Northeast Florida. The Jaguars and TIAA Bank have opened more than 500 volunteer shifts with various Habitat for Humanity affiliates including Jacksonville, St. Augustine, Clay County, Putnam County, Volusia Country, Nassau County and the Jacksonville Beaches. Volunteers can register for One Team. One Home. by visiting www.jaguars.com/huddle. More volunteer shifts will become available as the season continues. 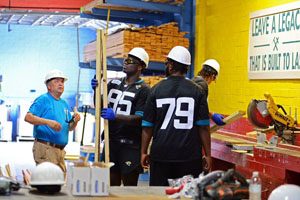 Members of the Jaguars rookie class took the first One Team. One Home. shift of the year on June 17, building the frame for a new house at the HabiJax warehouse.

“To put forth work and effort to give back and see the people who are going to be blessed by this definitely gave me a good feeling,” said Jaguars CB Picasso Nelson. “I am looking forward to coming back and doing more in the community.”

Fans can also participate in Huddle for 100 by volunteering for a cause of their choice and sharing their individual charitable efforts on social media using #JaguarsHuddleFor100. Fans may volunteer with another nonprofit organization, a religious institution, a local school or simply help a neighbor in need.

The NFL will drive a season-long club competition by awarding monthly community-focused prizes to top-ranking clubs based on volunteer minutes. Fans can log their minutes via social media using #JaguarsHuddleFor100 or by visiting www.jaguars.com/huddle. The League will give participating fans the chance to win a variety of prizes, including game tickets, team gear or a monetary donation to a charity of their choice when they track their participation online or use both the #NFLHuddleFor100 and #Sweepstakes hashtags.

“TIAA Bank is proud to team up with the Jaguars to make a positive impact on our community,” said Blake Wilson, chairman and CEO of TIAA Bank. “Helping area residents realize their dream of homeownership is rewarding on its own. The addition of a friendly nationwide competition makes it even more exciting.”

It’s a birthday to remember for Dreams Come True, as the organization received a $60,000 gift from THE PLAYERS Championship and a special birthday greeting…