It’s a birthday to remember for Dreams Come True, as the organization received a $60,000 gift from THE PLAYERS Championship and a special birthday greeting from PGA TOUR member Fred Couples. The donation celebrates Dreams Come True’s 35th Anniversary and commemorates the very first dream fulfilled with Couples during the pro-am of THE PLAYERS in 1984, which launched the Dreams Come True organization. THE PLAYERS’ donation will fund “A Year of Dreams,” and 12 children in northeast Florida will have their dreams granted. 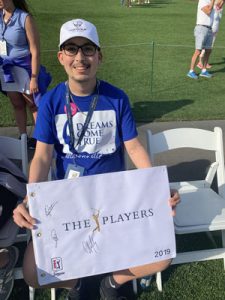 Over the past 35 years, THE PLAYERS has continued to stay involved with Dreams Come True, helping to fulfill nearly 30 dreams for local children battling life-threatening illnesses, while creating special experiences for dreamers and their families. Dreamer Allen Roberson (age 17) was a special guest on May 13, 2019 at THE PLAYERS Championship, enjoying an “inside the ropes” experience on the 17th hole during the practice rounds.

“As the home of our first dream, THE PLAYERS has always had a special place in the heart and history of Dreams Come True,” stated Sheri Criswell, Dreams Come True’s executive director. “We are truly honored by the generous donation in commemoration of our 35th anniversary and even more honored by the inspiration behind it – to provide a year of dreams.”

In 1984, the late Thomas R. McGehee, Chairman of Mac Papers, and his wife, Delia, met 17-year-old George Lee, who was battling cystic fibrosis. George loved golf and the McGehees arranged for George to play with PGA TOUR professional Fred Couples in the pro-am of THE PLAYERS. Following an exciting round of play, Couples gave George his driver. This simple act of kindness not only meant the world to George, but also to his family. A year later, George lost his battle with cystic fibrosis and his prized driver was buried by his side. George’s round of golf symbolizes Dreams Come True’s first dream, and to date more than 4,000 dreams have been granted for children on the First Coast. 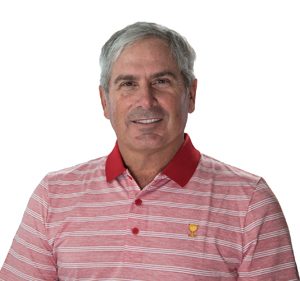 “Happy 35th birthday, Dreams Come True! It is indeed an honor to have been involved in your very first dream,” said Couples, who went on to win THE PLAYERS in 1984 after granting George’s dream. “It is a special memory that I still hold all these years later. Few things mean more to us than the opportunity to help bring smiles to the faces of children and families during their most challenging times. Congratulations to you for 35 years of doing just that—THE PLAYERS and I wish you continued success.”

Over the past 35 years, THE PLAYERS has continued to stay involved with Dreams Come True, helping to fulfill nearly 30 dreams for local children battling life-threatening illnesses.

“Our relationship with Dreams Come True is pretty special,” said Jared Rice, Executive Director, THE PLAYERS.  “Who knew that a simple act of kindness and compassionate gesture 35 years ago would launch an organization whose entire mission is to fulfill the dreams of children who most certainly deserve them. We share their passion for kids and families, and it is through the support of our fans, Proud Partners, volunteers and this entire community that we are able to help improve the lives of citizens throughout northeast Florida.”