On any given morning, the Clara White Mission at 613 W. Ashley St. is buzzing with activity. Serving breakfast to the homeless and holding job training classes are just two of the programs and services offered at the 115-year-old downtown mission, but a recent cut in federal funding may change the level of activity.

On July 2, Ju’Coby Pittman, president/CEO for Clara White Mission, announced that the 45% reduction in funding would severely affect the mission, reducing program services and cutting back breakfast to three days a week. Even before the mission lost almost half a million dollars in expected federal funds it had cut breakfast service from seven to five days a week.

“When we got a big cut a few years ago, the Clara White Mission decided we would do breakfast, the Sulzbacher would do lunch and dinner, also City Rescue Mission and Salvation Army, so we wanted to make sure that even though these cuts were occurring the homeless and underserved would continue to be served,” Pittman said.

Clara White had planned to serve about 125,000 meals in its 2019-2020 fiscal year, but after the announced cuts in funding said it had only enough to pay for little over 50%.

The mission launched a Call-to-Action Donation Challenge July 2 with the goal of replacing that money by Aug. 30. Less than a week later, nearly half of the $425,000 goal was raised through donations from the Jaguars Foundation, the Law Firm of Pajcic & Pajcic and Steve and Anne Pajcic, bestbet, Sysco, Chartwells Food Service and anonymous donors.

“Last week this time we didn’t have any money toward our goal,” said Pittman at a press conference July 9. “Today I want to announce that with the lead gift from the Jaguars and now the Pajcics, several individuals, bestbet and the Weavers, as well as a lot of donations through social media, we have raised $250,000.”

“We do three things we’re known for. We feed the hungry. We train the untrained. And we support veterans as they transition from homelessness, through transitional housing programs we offer, to permanent housing. Those services are desperately needed in this community and we want to continue to provide them. We want to make sure we can feed the hungry,” he said.

At that conference, two local groups presented checks for $75,000 each. The Jaguars Foundation’s lead gift was matched by the Law Firm of Pajcic & Pajcic and Steve and Anne Pajcic.

Ju’Coby Pittman receives a check from Chris Sutton, on behalf of the Jaguars Foundation, as Clara White Board Member Joe Whitaker looks on.

“On behalf of Shad Khan and the Jaguars Foundation, we are so proud to be able to support Clara White and the great work they have done for over 100 years as a beacon in downtown Jacksonville,” said Chris Sutton, Jaguars Foundation director of community partnerships. “This is an important staple to the Jacksonville community, and we invite other businesses and individuals to join us in helping them reach the threshold so they can continue to do great service at Clara White Mission.”

Attorney Michael Pajcic also presented a check to Pittman on behalf of the family law firm. “We think the Clara White Mission is a vital part of our community and hope that our matching of the Jaguars donation will have a snowball effect and other people in the community will join in and help support this wonderful mission,” he said. 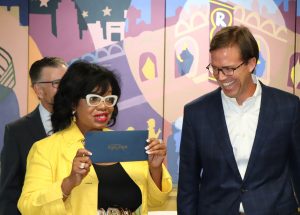 It’s not just the nonprofit’s programs and services that are in jeopardy.

“Our building is almost a hundred years old and we can’t keep up with the repairs,” said Pittman. “We’ve done internal audits, we’ve done everything humanely possible [to cut costs] and our board has stepped up with contributions, but we weren’t able to raise enough funds in such a short period of time,” Pittman said, noting she will be taking a 20% cut in her salary. “We’ve even cut some staff but couldn’t cut too much without cutting the quality of the programs and services we provide.”

Pittman said their reserves had pretty much been depleted and is looking forward to getting some help from the community. “It’s very important that the community see we have corporations who not only contribute to economic development, but they’re interested in the social issues in our community. That’s a real big feather in the caps of those organizations who give, as well as to our board members who pledged to give to this challenge.”

As if loss of funding wasn’t hard enough, Culinary Instructor and Chef Victoria Cannizzo said it was a critical time for the breakfast service – the freezer died the day before – and was grateful that others in the community, such as Feeding Northeast Florida, Sysco, and other food services, had come together to provide fresh food for the mission’s breakfasts.

August 30 is important, said Pittman, because they had just started their new fiscal year July 1 and had not heard about other grant requests in the pipeline. “It would be important to start strong in the first quarter and it buys us some time,” said Pittman. “We’ve got some fundraisers planned, we’ve cut staff as much as we can without cutting the quality. We realize cuts may come every year but it’s hard to prepare for deep cuts, especially over several years.”

Clara White Mission’s annual budget is $2.1 million, so the loss of the federal funds was a huge blow to what Pittman said was the heart and soul of the mission – feeding the hungry and homeless for 115 years.

It was Lutheran Social Service’s mission to fill in the gaps for neighbors in need of a meal that attracted Jeff Viau and his wife,…