Every year more than 40 percent of the food grown by farmers is either dumped in a landfill or left in the field to rot because it does not meet the size requirements of major food retailers. Because this food is perfectly healthy and nutritious, Farm Share has made its mission to distribute this produce to hungry people throughout Florida.

“A squash that is one inch too long or short is considered garbage and thrown away,” said Stephen Shelley, chief operating officer of Farm Share, adding that such substandard produce is called culls. “Farm Share provides an alternative by giving the farmer the ability to donate these culls in exchange for a tax deduction. As a result, most of the produce Farm Share receives each year comes from Florida farmers to be used to feed persons in need.”

Farm Share also receives nonperishable canned goods and other grocery products from retail stores, grocery stores, and food brokers nationwide, he said, noting the agency also operates the United States Department of Agriculture’s (USDA) The Emergency Food Assistance Program (TEFAP) in Southeast and Northeast Florida. This program provides Farm Share with canned goods and proteins, such as chicken, that are distributed in conjunction with its produce and other foods.

“In 2015, LSS was at risk of going into bankruptcy and losing the USDA TEFAP contract for noncompliance,” Shelley explained. “Farm Share agreed to come in and take over the food bank and the USDA contract to make sure the region continued to be serviced.” 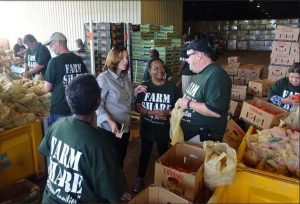 Emma Holt (middle) joins other Farm Share volunteers at the warehouse on Jessie Street in Jacksonville.

In addition, the nonprofit’s network of partner agencies has also grown from 80 to 120, with more signing up each month.

Making Farm Share unique among large food banks is its focus on healthy, nutritious food, and the fact that it acquires all its produce and groceries by donations. “We do not have to pay for any of the produce from farmers. We only pay the trucking costs associated with picking up the produce and moving it between Farm Share facilities,” he said.

“We also distribute all the food we recover free of charge to both the agencies and individuals. Most of the large food banks charge agencies a maintenance fee of 20 cents a pound for their food. Farm Share has always been free. As a result, we help make sure the most needy agencies and persons are served in every community,” he said.

Farm Share’s overall numbers have increased substantially over the last five years and attribute this growth to increased funding to operate its programming, Shelley said. However, he also said some of the increase in the amount of food distributed was probably due to the economic recession. “Farm Share does notice that the amount of people attending its Community Food Distributions increases and decreases based upon the economy and similar socioeconomic factors,” he said.

The nonprofit receives support from Publix, Walmart, and a few private donors in the way of food and cash donations, but most of its funding comes from the Florida Legislature and county governments. Because government funding can be volatile from year to year, Farm Share is always looking for monetary support from private sources so it can expand its programs.

Farm Share started a new Community Crime and Policing Program last year in Miami-Dade, Duval, and Alachua Counties to see if increased food distribution has an impact on reducing lawbreaking in high-crime communities.

“What we found was that in the high-crime communities where we consistently held food distribution events in conjunction with job training and health screenings, the crime rate decreased,” Shelley said.

By having law enforcement officers assist with the food distribution, Farm Share also discovered the relationship between police and sheriff’s departments with those communities has improved. In the future, Farm Share plans to expand the program statewide, he said.

It’s a birthday to remember for Dreams Come True, as the organization received a $60,000 gift from THE PLAYERS Championship and a special birthday greeting…