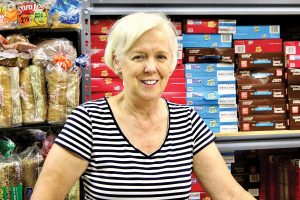 Joy, purpose, and an appreciation for the gifts God gives are the reasons that Lisa Obringer has served for many years as coordinator of the Catholic Charities food pantry.

After seeing a notice in her church bulletin, Obringer said she got interested in volunteering with Catholic Charities and has had a ringside seat since the early 2000s, watching the food pantry there evolve and expand.

“When I came to Catholic Charities, it really was not a food pantry,” Obringer said. “There were canned goods in a closet and people receiving emergency assistance would be given food that we might have. There was no basic platform, freezers, or bread/pastry from Waste Not, Want Not. Once Catholic Charities decided to make food a service priority, I coordinated the pantry and helped it grow into what it is today.”

At first, Obringer did it all – inventory, ordering of supplies, and scheduling volunteers to bag, restock and distribute the food. Later she delegated some paperwork to volunteers. “About 50 volunteers per month make the pantry operation happen,” she said, adding she currently works at the pantry Wednesdays and Fridays, while doing the planning and ordering from home.

“Due to the growth of the food pantry operation in the past two years, it became too much for me to coordinate alone. Now we have a team that shares responsibility for running the day-to-day operation of the pantry,” she said, adding that others share with her the duties of ordering, resupply, pick-up, and restocking, while another volunteer does the scheduling.

Obringer said she loves working at Catholic Charities because it is a religious organization with a special mission.

“Catholic Charities provides me a place to live the Gospel and, in a small way, try to make a difference in a person’s day-to-day life. My time at Catholic Charities has taught me to truly see that everyone is a child of God and should be given respect and dignity,” she said. “I love to walk through the courtyard coming into Catholic Charities and say hello to each person and look them in the eye. No one should be ignored. I also try to embrace the three sayings on the front of the Catholic Charities buildings: Act Justly, Love Tenderly, Walk Humbly with God.”

In addition to helping feed her spirit, Obringer said she appreciates that Catholic Charities does not “frivolously waste donor dollars,” and noted that 86 cents of every dollar given to the organization directly benefits the clients it serves.

“I also appreciate the expectation and culture that every individual, regardless of their situation, is treated with respect and dignity,” she said. “I think people normally think of the homeless or non-workers as only those needing food assistance. There are so many working people and families that struggle to make ends meet and live paycheck to paycheck. It only takes one problem – illness or a car breakdown – to create need.

“I recently read a piece that had the following quote from the poet Tagore: ‘I slept and dreamt that life was joy. I awoke and saw that life was service. I acted and behold, service was joy,’” she continued. “Giving back to our community and the common good gives me a feeling of joy and purpose and appreciation for the gifts God has given me.”

With more than twenty years of experience in nonprofit leadership and fund development, Angela Strain, GPC, will take on the role of Executive Director of…