Over the past 100 years Jewish Family & Community Services has been known by many names and has seen the programs under its umbrella grow exponentially.

Created with the mission to “help people help themselves,” the former United Jewish Charities has transformed from being known primarily for assisting people in need with food and emergency shelter to a multi-service agency that provides social and community services across the life spectrum to enhance the lives of children, adults, seniors and families coping with life’s challenges.

In 1917 four Jewish humanitarians – Julius Hirschberg, Rabbi Israel Kaplan, David Davis and Jack Rosenberg – established United Jewish Charities to care for folks within Jacksonville’s tiny Jewish population by extending loans of $10 to $100. During the years that followed, while continuing to be guided by Jewish values, the agency expanded its services in order to make them available to the entire First Coast Community. 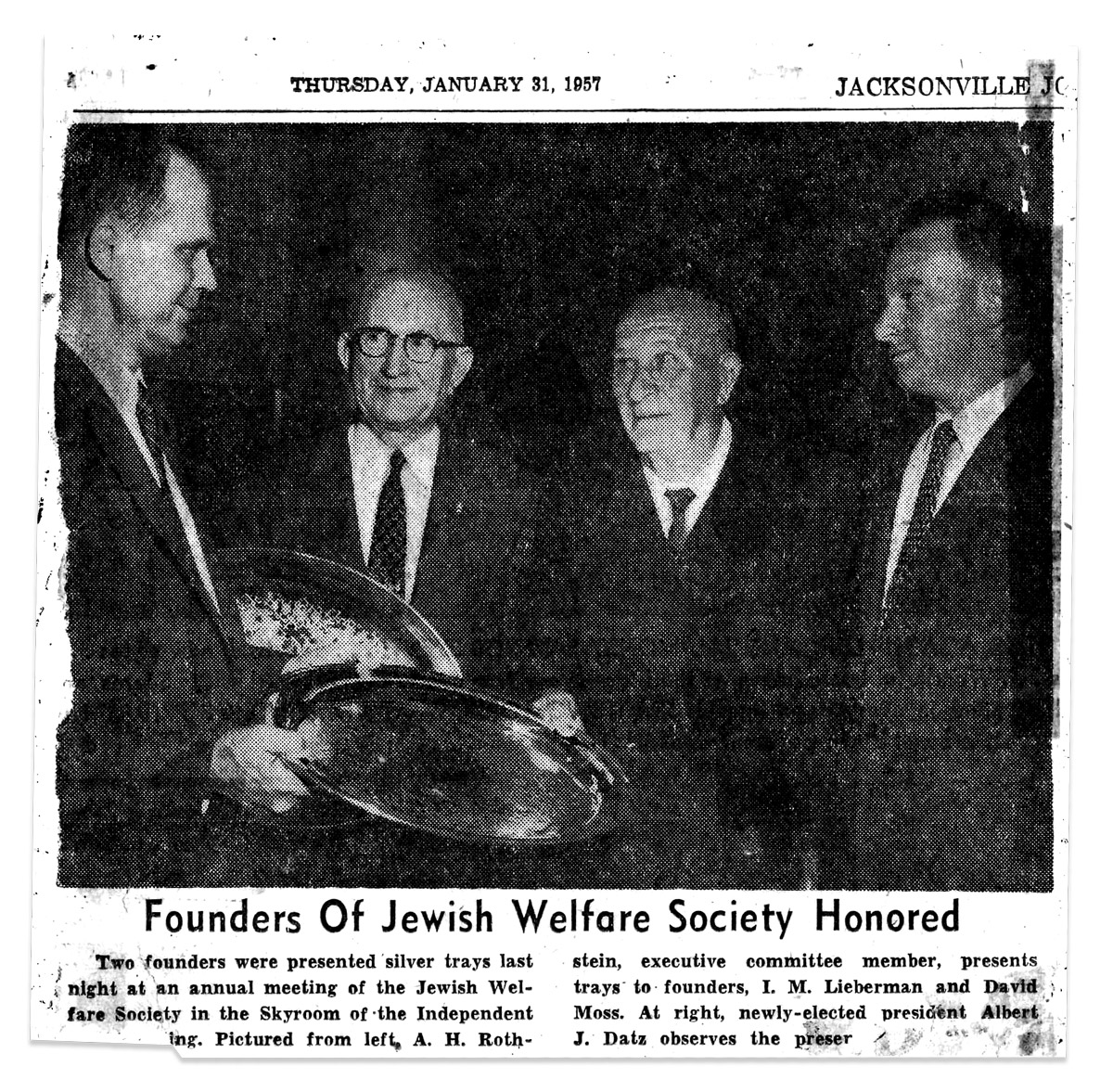 “JFCS was founded in 1917 by members of the Jewish Community who recognized those of all faiths living in need,” said Jodie Leach, JFCS board president. “They created a culture of service and a commitment to help anyone who came through their doors. This continues 100 years later. We are proud to serve the entire community through the commandment of our faith, “tikkun olam – to repair the world.”

A charter member of the United Way, having joined the organization when it was established in 1924 as the Community Chest, JFCS changed its name to Jewish Welfare Society in 1928. In 1935 JFCS formed a committee now known as the Jacksonville Jewish Federation to take care of the non-local, national and international institutions.

It was in 1946, just after World War II, that the agency turned its focus from relief to personal service. With the switch, it sought to care for the aged, began foster care for children, stressed preventative work in the community and hired social workers. It was also during this time the agency transformed from a welfare agency to one that specialized in counseling, and within two years – in 1948 – it became the only licensed Jewish child-placement agency in the country, placing its first child for adoption in 1951. Family and marriage counseling programs as well as services to River Garden Hebrew Home for the Aged began at this time as well as the resettlement of refugees from Hungry, Cuba, Vietnam and Russia.

A decade later in 1962, the agency changed its name to Jewish Family & Children’s Services to better reflect its objectives. Volunteers became more involved with resettlement programs and within a year work with the elderly independently intensified.

As the Vietnam war came to a close in the early 1970s, JFCS continued to concentrate on Russian resettlement, and due to the efforts of its volunteers, the quota of Russians setting in Jacksonville was raised.

In 1983, the name of the agency was changed once more to what it is known as today – Jewish Family & Community Services, denoting its devotion to the greater Jacksonville community as a whole and not just the Jewish community.

In 2001, JFCS collaborated with the Boys Home Association to form Family Support Services of North Florida, Inc., the lead agency for the administration of child protective services in Duval and Nassau Counties. Two years later, it began providing a range of community-based child projection services, and in 2005, it became accredited through the Council on Accreditation for Children & Family Services.

“It’s a very special time for JFCS. We are proud of our long history of serving Northeast Florida and look forward to celebrating our accomplishments and the positive impact we’ve had on the Jacksonville community over the last 100 years,” said Colleen Rodriguez, executive director of JFCS. “We are so thankful for the vision of our founders – the commitment of the leaders who came before us – and for the donors and staff who help us carry out our mission to this day. We know we are in the unique position of building the foundation for the next 100 years.”