It’s  one thing to open your home to a horde of relatives, but to willingly turn over your entire house to strangers may be an act of charity above and beyond simple kindness.

In the aftermath of a tragic car accident, Peggy  McDonald’s Avondale home became a refuge for a family that had just lost their 12-year-old daughter, Grace, when their Suburban was hit from behind near Yulee while traveling home to Ocala from an out of town wedding.

McDonald’s son, a resident of Ocala, called his mom after learning about the May 21 accident from a mutual friend, and asked if the grieving family could stay the night with her so they didn’t have to check into a hotel.

No one knew it then, but the family would be detoured in Jacksonville for 10 days while another daughter remained hospitalized in the Intensive Care Unit at Wolfson Children’s Hospital from injuries sustained in the accident. In that time, McDonald’s home of 45 years would become a place of healing for the grieving family and the epicenter of compassion as a community rallied to ease the burden of the recently bereaved. 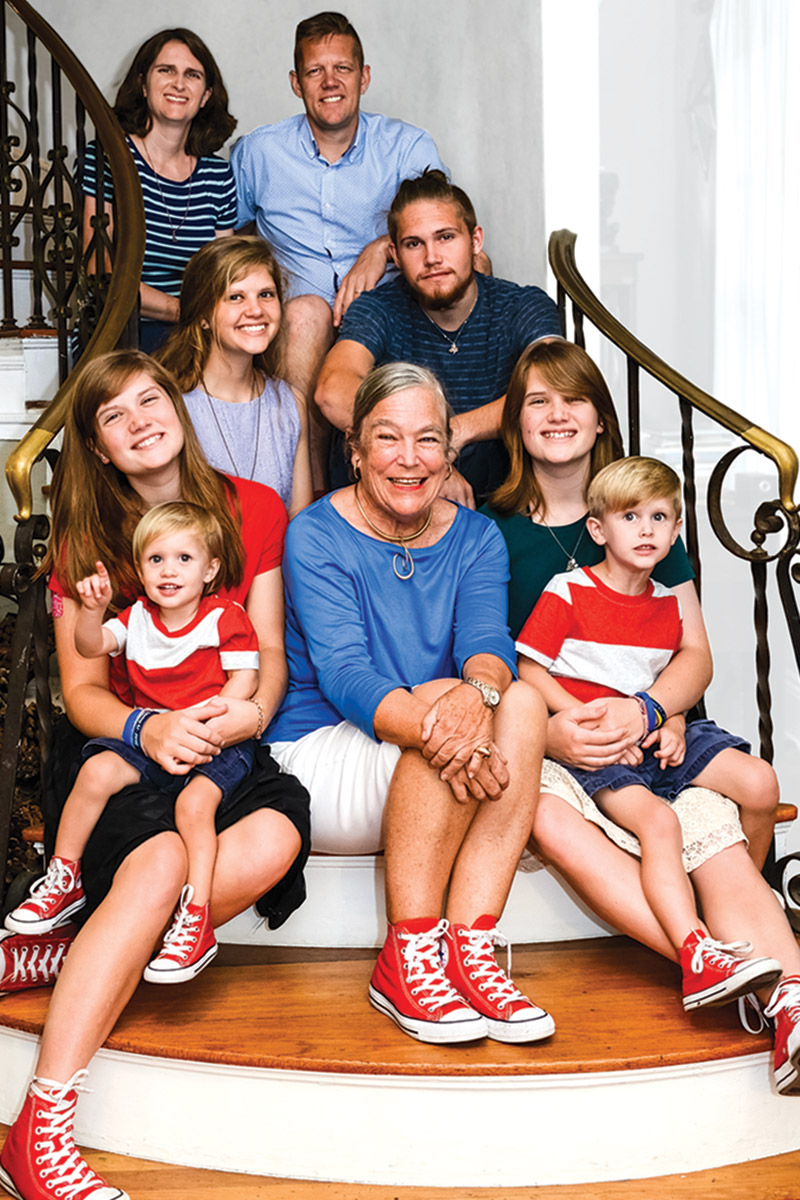 Only hours after getting that call from her son, McDonald met part of the Force family for the first time.

“He knew his mother’s heart before she even knew about the accident,” said Ben Roberts, the mutual friend of the Force family and McDonald’s son. “She didn’t have any background on the accident.”

It was around 1 a.m. when Raymond Force showed up at McDonald’s back door with four other family members and a friend who were all involved in the accident.

“That’s difficult,” explained McDonald of their initial meeting. “You don’t know each other. They just lost a child.”

Force was grateful for the impromptu accommodations, but figured they would only stay four to five hours.

“I felt a little bashful about it,” said Force, who is a pastor at Crossroads Bible Church in Ocala. “We felt like the Lord was wrapping his arms in comfort around us. To receive that kind of hospitality from a stranger…she just understood the pain we felt.”

McDonald’s hospitality didn’t stop with members of the Force family. It extended to the family’s out of town relatives in Pennsylvania and Illinois, as well as their close friends, the Roberts family, who, like the Force family have seven children of their own.

All told, 25 people stayed in the house that was affectionately referred to by its occupants as Camp McDonald. From as far away as China where the Force’s oldest son was on a mission trip at the time of the accident, family and friends funneled into McDonald’s home.

“She was the ultimate host,” said Roberts, who was given the moniker of Camp Director for his help in organizing all of the necessary logistics. “People were sleeping everywhere. It was really a refuge for everyone.”

According to McDonald, there were people sleeping on the floors, couches, and air mattresses. She gave up the comfort of her king-sized bed to accommodate five teenage girls, while another four slept on the floor.

“When I walked in the room the next morning all nine girls were on the bed laughing, crying, and looking at pictures of Grace,” said McDonald. “I could not have orchestrated a more peaceful scenario for the healing of those children to begin.”

As for McDonald, the 73-year-old woman slept in her closet. Of which, she says, she “suffered nothing.”

“She slept in her closet the whole time. We were all protesting it,” said Force. “We took over her house. There’s no doubt about it. We were surprised at how accommodating and joyful she was to do it.”

As word spread about the accident and McDonald’s unparalleled hospitality, members of the community and of different faith congregations donated food and money to help meet the needs of the family during their stay.

“The owners of Mellow Mushroom in Avondale brought pizzas one night,” said McDonald. “You can imagine how a house full of teenagers reacted to that.”

Members of St. Mark’s Episcopal, where McDonald is a parishioner, brought lunch and her prayer group donated money to help cover expenses. Another one of McDonald’s friends from Avondale Methodist made a significant monetary contribution, while members of San Jose Baptist Church sent more food.

“The whole scenario at my house was the body of Christ coming together to do what we are supposed to do,” said McDonald of the overwhelming generosity.

One woman from Christian Family Chapel, who asked not to be identified for her contributions, organized a small army of fellow parishioners to help make breakfast casseroles, gigantic sandwich rings, fruits and aluminum pans filled with hearty meals.

“I felt convicted. All these people were at Peggy’s house and she’s sleeping in a closet.  How is she going to feed them? They didn’t know how long they would be there,” the member of Christian Family Chapel explained. Saying that while she tried hard to stay under the radar when dropping off multiple meals, she ultimately ran into Melody Force, the woman who had just lost her daughter.

“I will never forget her words, either. She said, ‘We are so crushed in spirit, but lifted by the body.’”

The member of Christian Family Chapel said the community’s reaction superseded hospitality. “God’s hands were all over it. It was brotherly love; it was gentleness; it was kindness; it was bearing some of the burden.”

Some of the logistical burdens for those staying at McDonald’s house were the six loads of laundry that needed to be done daily. Ultimately, proving to be too much for her 50-year-old dryer.

For a while, they hung clean laundry on the clothesline until someone showed up with a new dryer for McDonald.

“I still don’t know exactly who all was in on the dryer…but see, I received,” said McDonald, who was supposed to be in Northern Michigan on a vacation during the time of the Forces’ stay.

Sidelined by her own car accident only a few weeks before, McDonald considers the experience from its inception to be divine intervention.

“This whole thing starts with God. All of it,” said McDonald. “I live, breathe and die to go to Northern Michigan, but I would not have missed this.”

Among the 650 people who attended the memorial service for Grace was McDonald, who was given a pair of red Converse high-tops as a token of appreciation by the Force family.

The shoes had become a symbol of Grace’s life since she wore them constantly, insisting to her mother that they went with everything.

“Grace was wearing red Converse high-tops when the accident happened,” said Force, explaining how excited she was to get the sneakers as a birthday gift from friends. “She wore them every day, even to church.”

Now, McDonald has her own pair to remember the young girl and the kindness shared by so many after her passing. The red sneakers reflect not only the vibrancy of Grace’s life, but the neighborly love and generosity it inspired. As such, McDonald cherishes them, just as she does the family from which they came.

“We couldn’t believe we had only known her for 10 days,” said Force of McDonald. “She felt like a lifetime friend. “Grace is smiling down on the situation in a lot of ways.”

After his 2006 retirement from his mail route with the United States Postal Service, Tom Doyle’s wife, Lois, soon became a “volunteer widow.” Ready for…