Leaders look to create a place of peace for women and children, the largest segment of homeless today

The I.M. Sulzbacher Center vision of “ending homelessness one person at a time” is a step closer to fulfillment, thanks to many well-known area philanthropists and businesses.

Fourteen donors have stepped up to the plate to help fund Sulzbacher Village, a new campus for homeless women, children, and families.

“Sulzbacher Village will build its new campus outside of the downtown core, where our homeless women and families can live safely and continue to access the services they need to put their lives back together,” said Cindy Funkhouser, Sulzbacher President and CEO.

The facility will include studio, one-, and two-bedroom units to house single women, female veterans, and two-parent families, with a total of 70 units accommodating up to 310 people, while 30 more units will house women and families in need of short-term emergency housing and medical respite care.

“Women and children are the largest segment of homeless today. There are 200 at Sulzbacher Center, with a waiting list,” said W.C. Gentry, chair of the “Opening Doors” fundraising campaign. Gentry was instrumental in helping the Center obtain land needed for the new Village.

In 2012 when his father died at age 94, Gentry sought to honor his dad and talked with the minister about using 4.5 acres of church land for a playground in his father’s name. However, Gentry said he knew of the Sulzbacher Center’s long-time dream of the building project. He said he put two and two together and spoke with people at the Center about the church’s available acreage.

“The church embraced the idea of using the land for the Sulzbacher Center’s project,” said Gentry. The United Methodist Church agreed to a long-term lease for $1 per year, he said, adding that the plan fits with the Methodist Church Conference’s commitment to do local missionary work for communities in need.

“We made the decision to go forward with Sulzbacher Village for women, children, and families,” explained Murphy, a Sulzbacher Center board member in 2014-15 fiscal year. “This has been kind of a dream around the organization for a long time.”

In addition to serving on Sulzbacher’s board, on the first Wednesday of every month, a group of Fidelity National employees prepares meals from scratch, while another group serves the meals for up to 500 people at the Center.

“We’ve been doing that for five years now, and it’s very popular among Fidelity employees – they can’t hit the respond button fast enough [when the email request for volunteers goes out every month],” Murphy said. 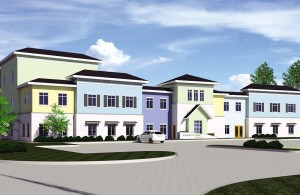 The Opening Doors fundraising campaign has so far raised $16 million, with about $11 million awarded in the form of low-income tax credits from the State of Florida (Florida Housing Finance Corporation) along with other programs, while almost $5 million more was raised from individual and foundation donations.

The initial seed money was provided by Gentry, who expects the balance of $2.5 million to be raised by the public campaign by the end of 2015.

The Lead Gift for the project came from the Lucy B. Gooding Charitable Foundation Trust, while naming opportunities came from a variety of trusts, funds, corporations and individuals, such as Gentry and Murphy.

Florida Blue will name the pediatric clinic, along with Baptist Health/Wolfson Children’s Hospital, which will be providing operational support and funding.