There is an adage that says the more things change the more they stay the same.

When it comes to serving the City of Jacksonville, this could be said of the Haydon Burns Library’s evolution from a resource of learning into the Jessie Ball duPont Center, a hub of nonprofits dedicated to improving lives in the community.

Fifty years after opening as the cleverly-designed downtown library, the iconic building has been renovated and repurposed by the Jessie Ball duPont Fund into a new center that honors its past while proving to be an innovator for the way it serves the city’s residents into the future.

In the process, one of Jacksonville’s last remaining examples of Mid-Century Modern architecture was saved from demolition after sitting empty since its closure in 2005, when it had become unable to keep up with the technological requirements of a library that had transitioned from the Dewey Decimal system into the digital age.

The Haydon Burns Library, named after the city’s longest serving mayor, was considered state of the art when it was designed by Jacksonville architect Taylor Hardwick.

Built in 1965 at a cost of $3.7 million, the 126,000-square-foot building was designed with floor-to-ceiling windows on the ground floor that, according to the book Taylor Hardwick: 60 Years of Design, “would attract people and create in them an interest to enter and find out what was going on inside.”

Just as notable as what was going on inside was Hardwick’s unique design of the building’s exterior, featuring 88 “fins” extending from the second floor to the roof vertically, similar to the way 88 keys on a piano spread horizontally. The fins were implemented to catch the wind and cast shadows to help keep the building cool, creating a melodic design of function and fun, perhaps hinting at the playfulness taking place inside at the library’s former puppet theater.

Today, that puppet theater is used as a lecture hall which seats 149 people and features a state-of-the-art sound system. Still, it boasts the imaginative scalloped stage proscenium original to the building.

Perhaps just as memorable to Hardwick’s design is Momentum and Direction, the vivid mosaic mural made out of a rainbow of glazed bricks, designed by local artist Ann Williams. It wrapped all four sides of the elevator and stair tower on the east side of the building. Now, two sides of the mural are exposed to the streetscape instead of one.

The new design also created an outdoor patio area for future retail space such as a coffee house or restaurant. Wherever possible, green building techniques were implemented, including a cistern used to collect rainwater to irrigate the roof-top garden, solar storage tanks that supplement the electric water heaters and a white reflective roof that helps make the building more energy efficient.

So it goes, this melding of old and new, past and future.

Much like the original mosaic of emerald-colored tiles that glisten on the exterior, the building exemplifies this patchwork of a long history of learning and service to the people of Jacksonville, one that continues into the future through the repurposing of the building as a center for nonprofit organizations.

Brooke Robbins, Senior Associate Architect with KBJ Architects, spearheaded the $25 million renovation after the building was purchased for $2.2 million by the Jessie Ball duPont Fund in 2013.

“This isn’t a typical developer property,” explained Robbins.  “They looked at this as an investment.”

It’s easy to see that investment in terms of the building’s features spread out over four floors including one below ground. There is a conference center and three seminar rooms; a Great Hall for receptions and exhibits; a roof garden for social events; a boardroom seating 45; a training center with four training rooms, and “Hot Desks” that can be rented by individuals for short-term work spaces.

However, the Jessie Ball duPont Fund’s investment is not limited to the building. It’s an investment that was ultimately made in the community.

“We carry this as an asset, but it’s not simply for our benefit, it’s a community benefit. It is something that serves a much larger public interest,” said Sherry Magill, president of the Jesse Ball duPont Fund. “What I hope this means is that those nonprofits that are really in the business of community building, helping our most vulnerable residents and citizens, will see this as their home.”

Paralleling the innovative design of the building is the pioneering approach of institutional endowments that made the project viable.

Given the erosion of capital markets resulting from the Great Recession, the trustees of the Jessie Ball duPont Fund decided to devote a portion of the endowment into developing the Center as a community asset.

Just as its portfolio includes traditional stocks and bonds, hedge funds, and other assets, a portion of the Fund’s capital was invested into the Center. Of course, results from such an investment can’t be measured in dollar figures alone, without giving consideration to the public benefit the Center provides by serving as a gathering place for philanthropic and nonprofit organizations. 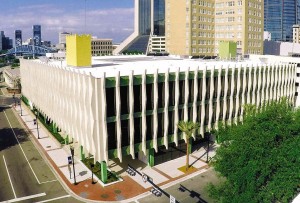 Magill emphasized the obligation she and the trustees of the Jessie Ball duPont Fund had “to be ultra-responsible” with its endowment which was created by the will of Mrs. duPont, one of the great philanthropists of the 20th century who called Jacksonville home.

While traditionally the duPont Fund is a grant maker, not a developer or landlord, the innovative investment in the Center is in line with the Fund’s principles by developing a permanent community asset.

“It is absolutely in keeping with our mission as a charitable grant maker, but it’s part of a larger strategy. We have that money to serve a community interest; to serve a greater good,” Magill explained. “We certainly do that through our grant making. But, there are other ways to think about that endowed capital. With this facility we decided to convert some of our assets that are in traditional markets into this asset.”

Although the return on this investment can’t be measured exclusively by capital, the benefit it provides the nonprofits are certainly tangible.

“It drives down operating costs of nonprofits…allowing them to redeploy philanthropic dollars to their mission,” said Magill. “This rent goes to a greater purpose. They could never afford this kind of space, this location or this technology.”

The Delores Barr Weaver Policy Center has the claim to fame of being the first tenant in the building. Lawanda Ravoira, president and CEO of the Delores Barr Weaver Policy Center, recognizes the unique opportunity that has been made possible by the Jessie Ball duPont Center, part of which was being able to design their space to align with their function instead of having to retrofit themselves into an existing space.

Crediting the visionary leadership of Magill, Ravoira said working in the repurposed space has been uplifting for their 13 full-time staff members who now have resources at their fingertips they would never have been able to afford on their own.

However, for Ravoira it’s the message of value that it sends to clients of the Delores Barr Weaver Policy Center, which Ravoira appreciates most about being a tenant in such an extraordinary space.

“The message it enables us to give to the people we serve – the young girls and families who come here – is powerful,” explained Ravoira. “It says ‘You are valuable and deserve to be in a space that honors you.’”

Lauren Weedon Hopkins, Regional Director of Catholic Charities, is grateful to have the agency’s Workforce Development Program in the Center.

“We are utilizing the state-of-the-art conference rooms for our job readiness trainings for our clients,” said Hopkins. “We have access to great technology, which is especially important as we help our clients develop individual work plans and search for jobs.”

There are 10 tenants in the building, as of fall 2015, with another four nonprofits moving in by January 2016. Magill estimates there will ultimately be 16 to 18 organizations in the repurposed Center, which is thoughtfully designed to nurture team building and enhance the collective voice of the nonprofit world.

“It is in the best interest of the community that they live under the same roof and that they enhance their collaboration,” said Magill, who hopes the Jessie Ball duPont Center will raise the visibility of the nonprofit sector’s potential to deal with many of the challenges in our community.

Ravoira has already noticed the sharing of resources and deeper relationships with fellow nonprofits taking place.

“The synergy between the different nonprofits organically happens is not something you typically get to experience,” said Ravoira. “All of us being in one space creates this incredible opportunity for exchange and for the work we do to be more closely aligned.”

Rena Coughlin, CEO of the Nonprofit Center of Northeast Florida and a tenant in the new Center, believes the building, with its long history of service and unique features, is symbolic of the of the nonprofit community’s efforts to better the city.

“I am thrilled to have an important marker in downtown of this excellence that portrays the nonprofit sector as innovative, as caring about recycling what’s important, about renovating and about transparency,” said Coughlin. “This building is beautiful. It’s transparent – full of glass and life. Even architecturally, it reflects the values of the nonprofit sector.”

Like a story in one of the books that used to line the shelves of Jacksonville’s downtown library, the building designed by Hardwick and repurposed by the Jessie Ball duPont Fund, has begun a new chapter.

However its future is written, it will no doubt continue as it began, with a legacy of service to the people of Jacksonville.

“I think that the future of this organization, of this building and of the nonprofit sector is that together we will be able to take on some of the biggest challenges of our times – poverty, homelessness and education,” said Coughlin. “Having a building and a presence that stands for that will really be a game changer.”

Veterans were honored by a local charity and by the City of Jacksonville during the first week in August. We Can Be Heroes Foundation hosted…